It’s time to put the “geek” into “Garber Geektography” with a look back at one of my first photo assignments on “perspectives” in The Arcanum. Karen Hutton presented us with a pretty basic, but eye-opening challenge to produce three images of three different subjects from three different vantage points. She wanted one shot from below, one shot from above, and one from a straight perspective. So what’s a geek to do when presented with such a challenge? Go grab Michelle’s Poison Ivy figurine for a date at the Atlanta Botanical Gardens, of course (the date was with Michelle, not Poison Ivy …  ’cause that would be weird). 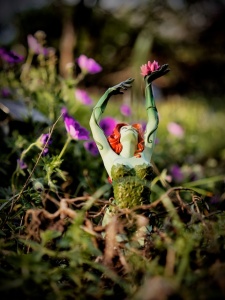 Poison Ivy from the low angle.

I really did not know how tricky this was going to be when I started, given the size of the small bust designed by comic book artist Amanda Conner. I wanted to place Ivy in her natural habitat and sought out flora that complimented the color scheme. This meant lying down on the sidewalk along the gardens, figuring out the best light and angle, while also trying to find a slight slope to get the “from below” angle. This proved the most elusive perspective, given the fact that Ivy is looking up while I wanted to focus on the eyes. I also had limited myself to using the 35mm prime lens that I had at the time, which meant that in addition to lying on the ground, I had to get pretty close. I wasn’t as happy with this image, because the angle didn’t feature the eyes or face as well as it should. I do like, however, how the lines of the background landscape look from this angle, something that would later influence my landscape photography. I probably also looked more than a bit strange as I was arranging the dead roots to camouflage her base. I think at one point, a mother came by as I was lying on the ground and said to her daughters, “Awww, look, he’s taking pictures of a fairy.” I don’t think Pamela Isley would like that one bit. END_OF_DOCUMENT_TOKEN_TO_BE_REPLACED