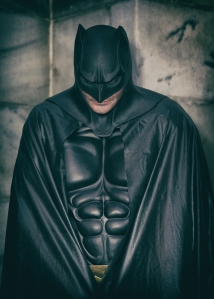 A cosplayer from DragonCon 2014 reenacts the classic pose from the end of Batman’s story in the Nolan films.

Since we are known around our stomping grounds as consultants on geek culture, several folks have asked us whether or not we are tuning in to watch Gotham tonight on FOX. Of course we are! We will give most comic book shows a chance, and we are rather partial to the Bat-verse. Michelle’s favorite character, after all, is Batgirl. But why tune in to another interpretation of the Batman mythology? 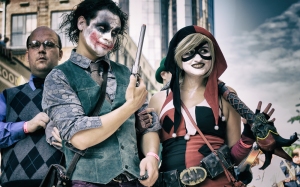 I wonder how long it will take for the Joker and Harley to come in and steal the show? Great cosplayers from the DragonCon 2014 parade.

1. We are suckers for an origin story, and while Gotham starts out with the classic origin of Bruce Wayne, I’m hopeful that the show will not center around him. Rather, it looks like we will get to see some intriguing beginnings of Catwoman, Penguin, Poison Ivy, the Riddler, Commissioner Gordon, and perhaps even the Joker. The character I’m most looking forward to, actually, is the 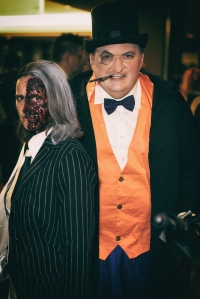 It’s never a good thing to see Harvey Dent and Oswald Cobblepot conspiring in a hotel. From DragonCon 2014.

Penguin, a crime boss whom I have never cared for in any television series or movie. The trailers of Robin Lord Taylor’s performance as the character, though, are diabolical and amazing. 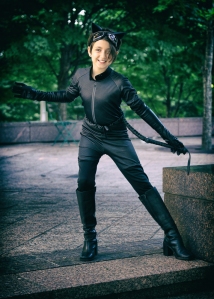 Gotham’s Selina Kyle will be a bit younger this time around. 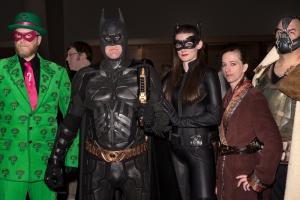 Wait, the Riddler wasn’t in the Nolan trilogy, was he? A quick shot at the Marriott during DragonCon 2014

3. Because Batman is far less interesting than the characters around him. A lot of folks are wondering how a Batman show can succeed without Batman. If you watch the Nolan films, however, the only one that is really about Batman is Batman Begins. You get to learn about his origin and training there, and most of the pieces of his psychology are there. When you get to The Dark Knight and The Dark Knight Rises, though, the real show belongs to the Joker, Bane, and Catwoman. 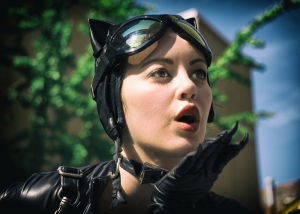 Catwoman blows a kiss to an unidentified paramour at the DragonCon 2014 parade.

4. Because of the potential for strong women characters. If they are indeed taking cues from Greg Rucka’s Gotham Central series, then they are pulling from a writer who has a great track record of strong female characters who are more than foils for their male counterparts. And since Bruce Wayne is only twelve or so, maybe–just maybe–every female character in this show will not have a crush on him (that’s right, I’m looking at you, Arrow). I was very excited to learn that one of my favorite characters, Renee Montoya, was going to be a part of the crew. I just question where they will go with her story, hmmmm. 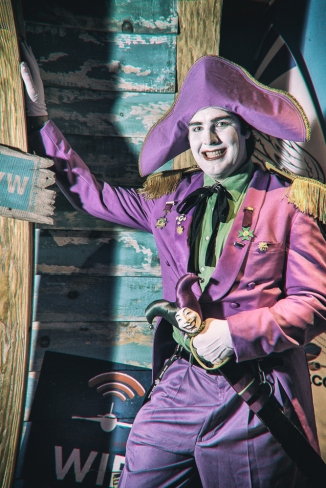 Sailor Joker agrees. There is always a need for more Harley. Taken at the Atlanta Aquarium during DragonCon 2014.