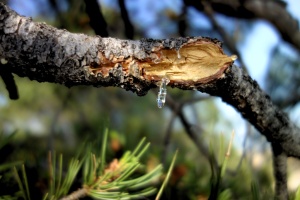 Last year in the early morning at the Grand Canyon, this tree sap caught my eye.

I adore Sherlock Holmes. Truly. I fell in love with the stories by Sir Arthur Conan Doyle as a child and then, later, the BBC television show starring Bendedict Cumberbatch and Martin Freeman. I continue to be intrigued and captivated by both the mysteries themselves and the secret of Sherlock’s power of observation.

A cool device used to point out the different geographical elements at the North Rim of the Grand Canyon. I was drawn to the textures of the brass, as well as the initials carved on the sides.

Of course, as Sherlock would state in no uncertain terms to his friend and colleague, Dr. John Watson, there is no “secret.”  Shortly after meeting Sherlock, John Watson, the reader/viewer’s entry point into Sherlock’s world, admits his consternation and delight in Sherlock’s abilities.  Watson then grants the audience access to Sherlock’s thoughts and echoes the question we all have at some point—how does he do it? Holmes, in response to Watson’s query, responds, “You see, but you do not observe.” Huh. Ok. But what does that mean?

What does it mean to see but not observe?  In many ways, this idea of moving beyond simply seeing something to truly observing it, reminds me of the practice of mindfulness. The University of Massachusetts Medical School’s Center for Mindfulness in Medicine, Health Care, and Society defines “mindfulness” as  “The intention to pay attention to each and every moment of our life, non-judgmentally. While there are many possible definitions, the key aspects of any definition of mindfulness involve purposeful

A frozen holly berry that Dave shot with a dedicated macro lens during Snowpocalypse 2014 in Hothlanta.

action, focused attention, grounded in the current experience, and held with a sense of curiosity.” (See http://www.umassmed.edu/cfm/Stress-Reduction/Faqs/)

Let’s parse that out a bit: The intention to pay attention. Purposeful action. Grounded in the current experience.  Another way to say that might be…Breathe. Slow Down. Pay Attention. Relax. Focus on the present.  I tend to live in the future, to imagine and dream and wonder and plan and worry for what’s around the corner–to the extent that I sometimes ignore what is right in front of me. The imperatives to breath, slow down, pay attention and relax are the reminders I often need when photographing. Or practicing martial arts. Or when I get stressed.  No wonder the practice of mindfulness is often incorporated into stress-reduction techniques! 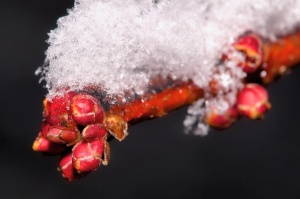 Some frozen buds in the Snowpocalypse of 2014. Dave learned how using a flash and macro lens could effectively blow out the busy background, making the subject pop.

Sherlock’s accusation works well for beginner photographers (like me!). He reminds us take time and energy and focus to observe the details.  Open our senses.  Notice form, lines, light, shadow, structure, and texture.  Move around. See things from different angles.  Get low!  I think this is why I love macro photography so much. When I take the time to really observe and slow down, I am in awe at the minute details in a leaf, the beauty and intricate structure of a pine cone.  I see something bigger than me.

This seems like good advice for when I’m not holding a camera, too. I’m learning to see the parts, the individual elements. Breath. Slow Down. Pay Attention.  I’m learning to look at the problem, the situation, or the person in front of me from different angles. I am grateful for the moments when I am most aware, like when I notice the shaft of light illuminating a leaf or the shadows playing across a building. I realize I am learning to see things in a different way and I hope you will, too!

Sometimes using a macro lens transports you to a whole new universe. Dave used the macro lens again to photograph a frozen plant during Snowpocalypse 2014. He named it after the “Rainbow Bridge” in the Thor comic books and movies.